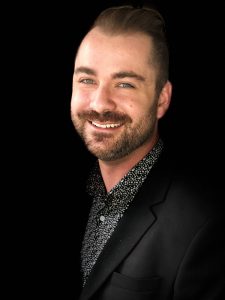 When, as a young teen, Marietta (Scott's sister) demanded that he blow dry her hair, it was clear that Scott was destined to be a hair designer. This third generation stylist began his formal career as the first student of Colorado’s cosmetology apprenticeship program, which was founded by his mother. His craft was further honed with training at the famous Bumble and Bumble salon in New York City.

After 5 years of working and training at the Rita B Salon’s in Colorado, Scott headed out to Los Angeles for some new experiences. While working at a high end salon in Brentwood, Scott was offered and accepted a position as national educator for the prestigious Phyto hair care line, and he spent the next few years traveling to some of the most elite salons in the western United States. When not traveling and training, Scott worked his magic on a number of celebrities and Los Angeles elite.

In 2013, Scott opened the newest Rita B Salon at the stylish and modern Beauvallon. Scott is a master with color and a true talent with a pair of shears and a blow dryer.

Book an Appointment with Scott.

From brassy to classy

Growing it out, only to give it away!

16 inches of Before and After

Make an Appointment with Scott